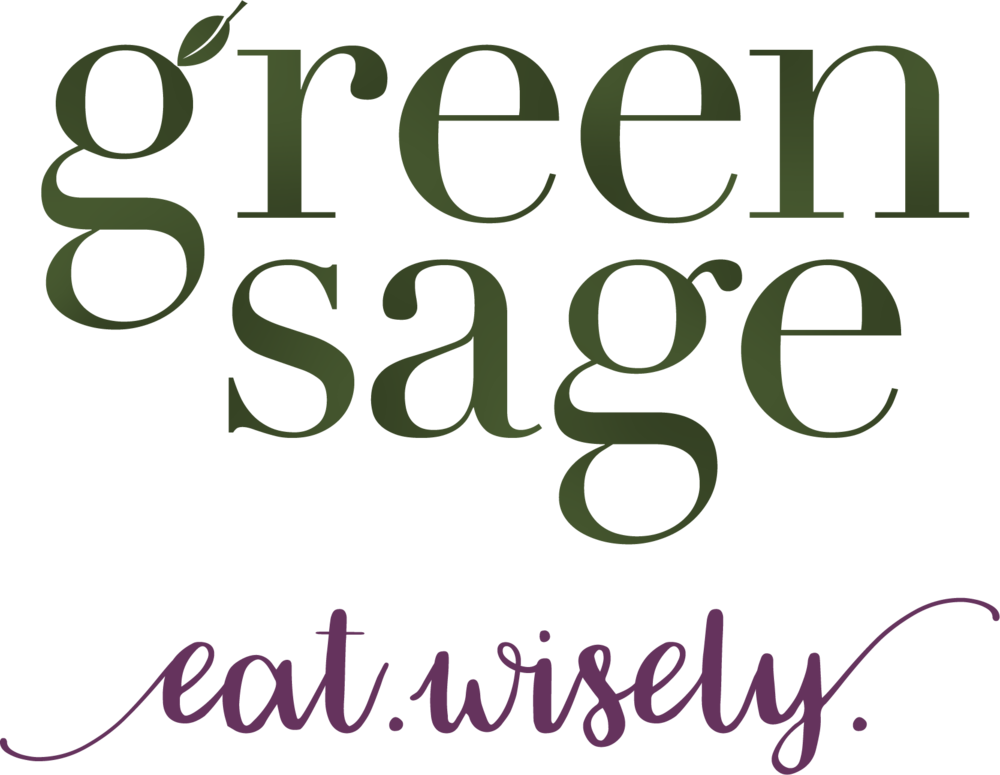 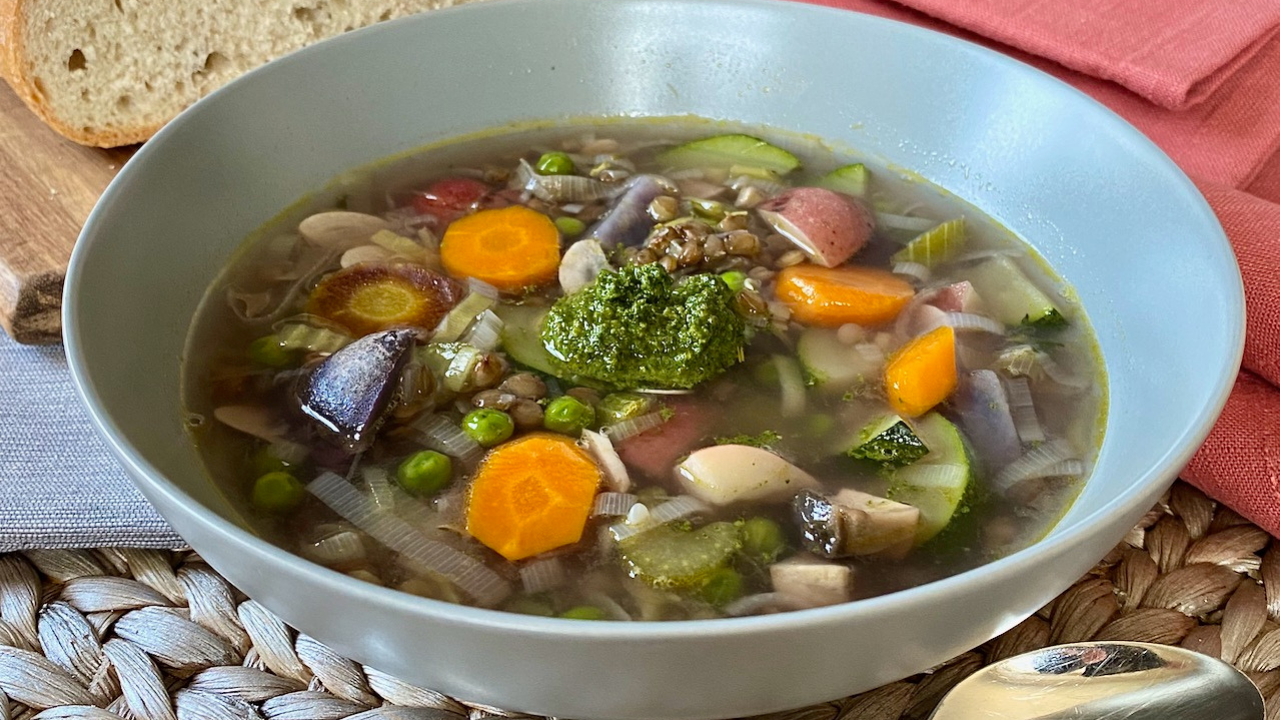 I learned this recipe while living in the South of France, teaching English to middle school students. I had just graduated college, and I was in Provence on a Fulbright Teaching Assistantship.

I had the amazing good fortune to be assigned to a small village called Saint-Auban, nestled in the foothills of the Alps. It was bathed in sunshine year round, and enjoyed a pleasant, mild climate partly attributable to the steady stream of wind crossing the Mediterranean Sea out of North Africa that the locals refer to fondly as le Mistral.

Doubling my delight, once I arrived, I became close friends with one of the English teachers at the school, Josiane, and her husband Max. It was on their outdoor terrace, surrounded by a soothing landscape of rolling hills, that I was first treated to Soupe au pistou, a vegetable soup in a clear broth flavored with pesto.

Now, whenever I make this meal, I'm reminded of those days, around a table with dear friends as warm as their emblematic Mediterranean sunshine. And I'm happy to share this recipe and these memories with you here. 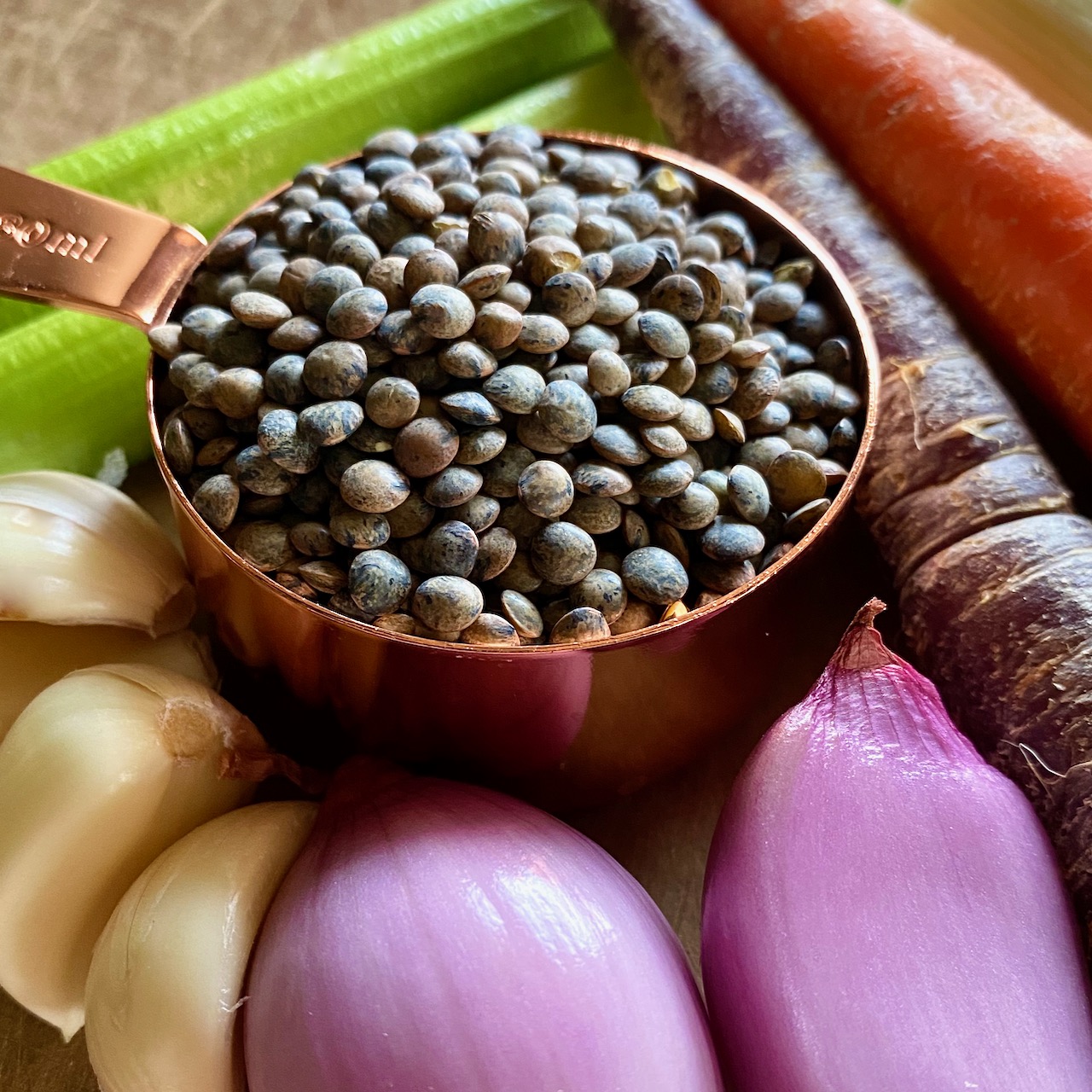 For this version, I've added French green lentils to the mix -- admittedly a small deviation from the traditional recipe, which would normally feature white beans instead.

The reason is simple. Lentils cook up in about the same amount of time as the rest of the soup and don't require any advance planning.

It is helpful, however, to have some pesto on hand. It can be difficult to find non-dairy pesto in stores, but Trader Joe's sells it, as do Wegmans and WholeFoods.

If you'd like to make your own, I've included a recipe for that here, too. See below.

If you're making your own pesto

1. Prepare your vegetables as stated in the ingredients list. To save time, begin with the leek, shallot, and garlic, and then start them sautéing as described in step 2, while you chop the carrots, celery and potatoes. 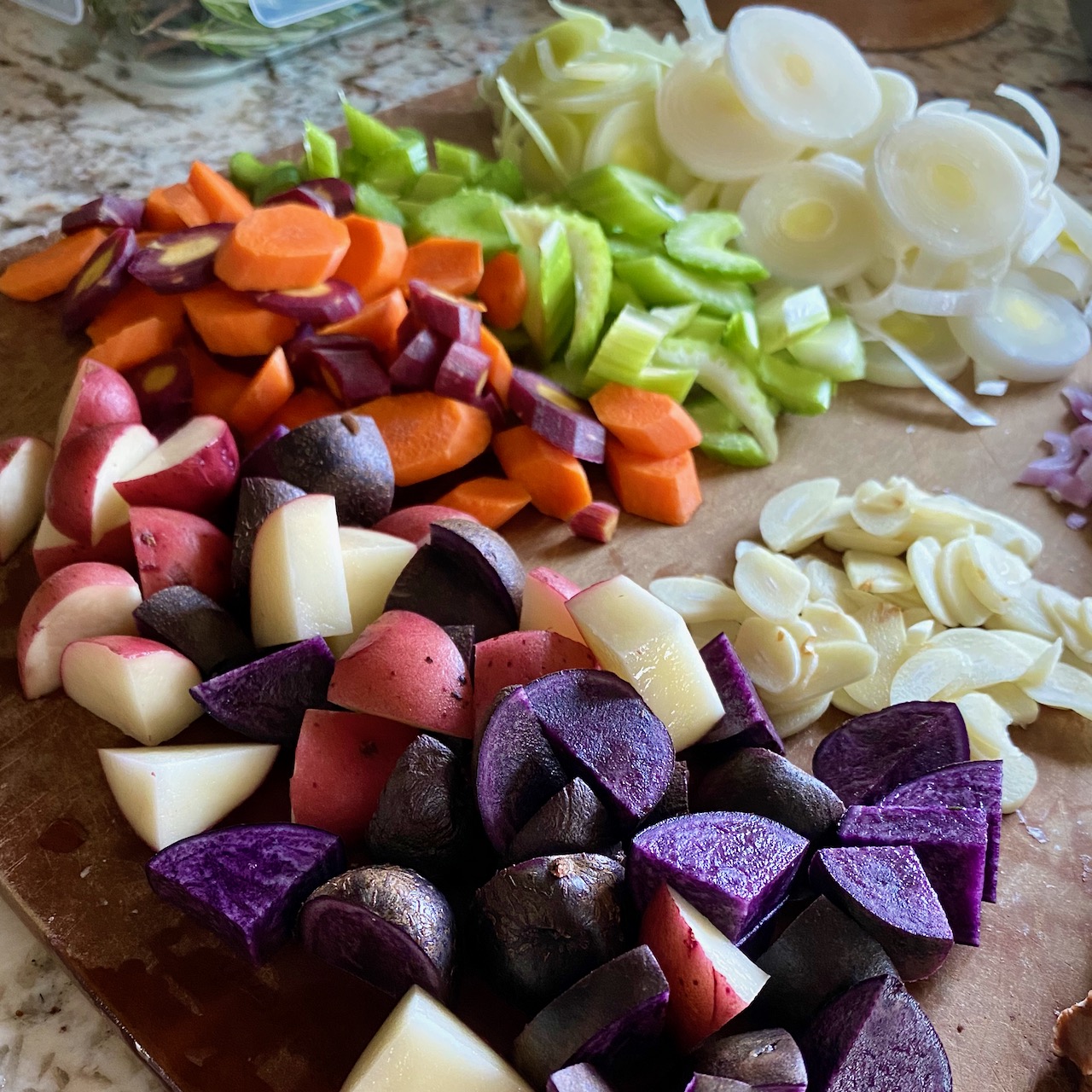 2. In a soup pot, heat 1 Tbsp of olive oil over medium-high heat. Add the leek, shallot and garlic. Sprinkle with sea salt and stir for a couple of minutes, until they begin to soften. 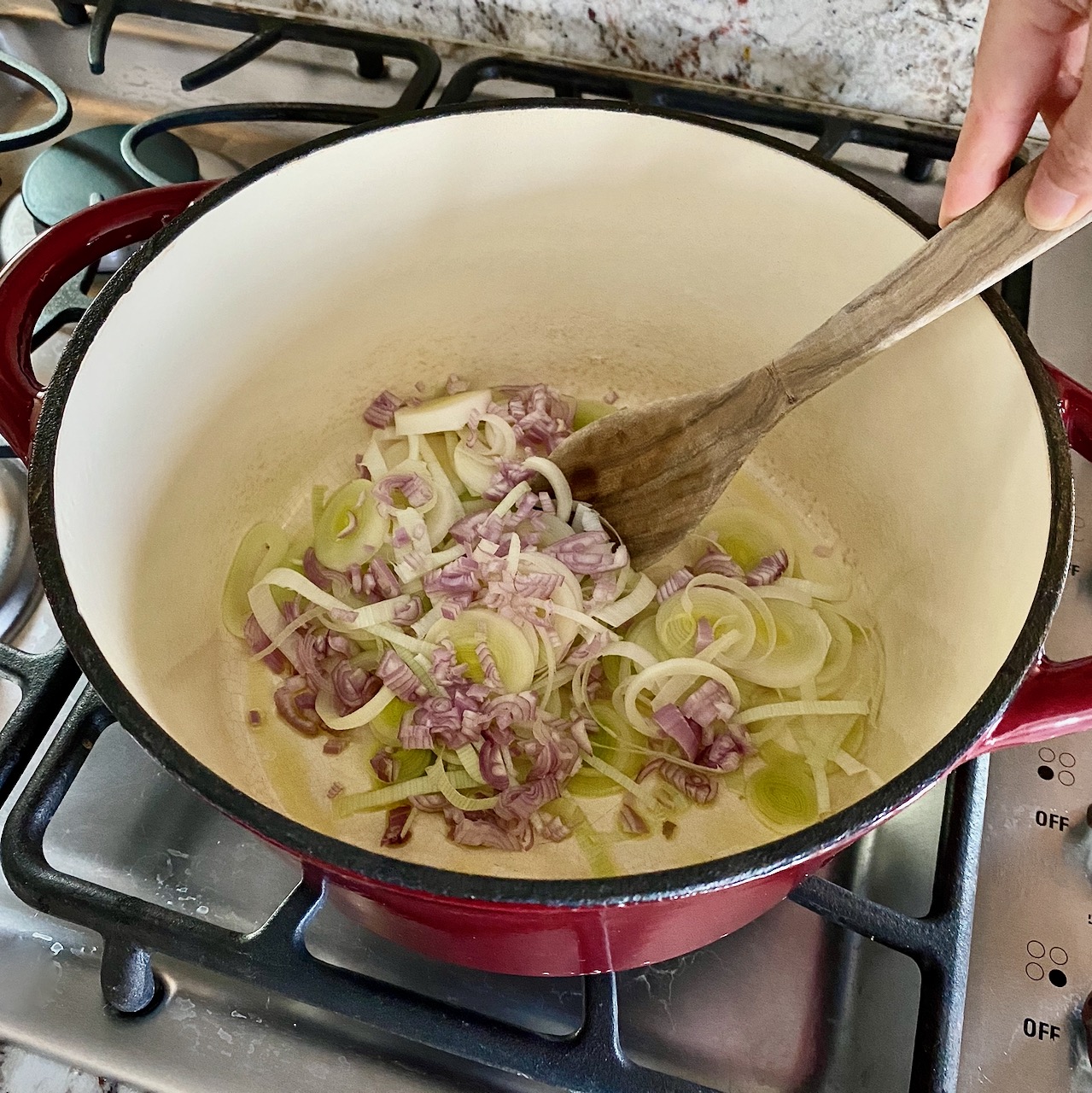 Stir to combine, and continue stirring occasionally until these vegetables begin to soften, too. 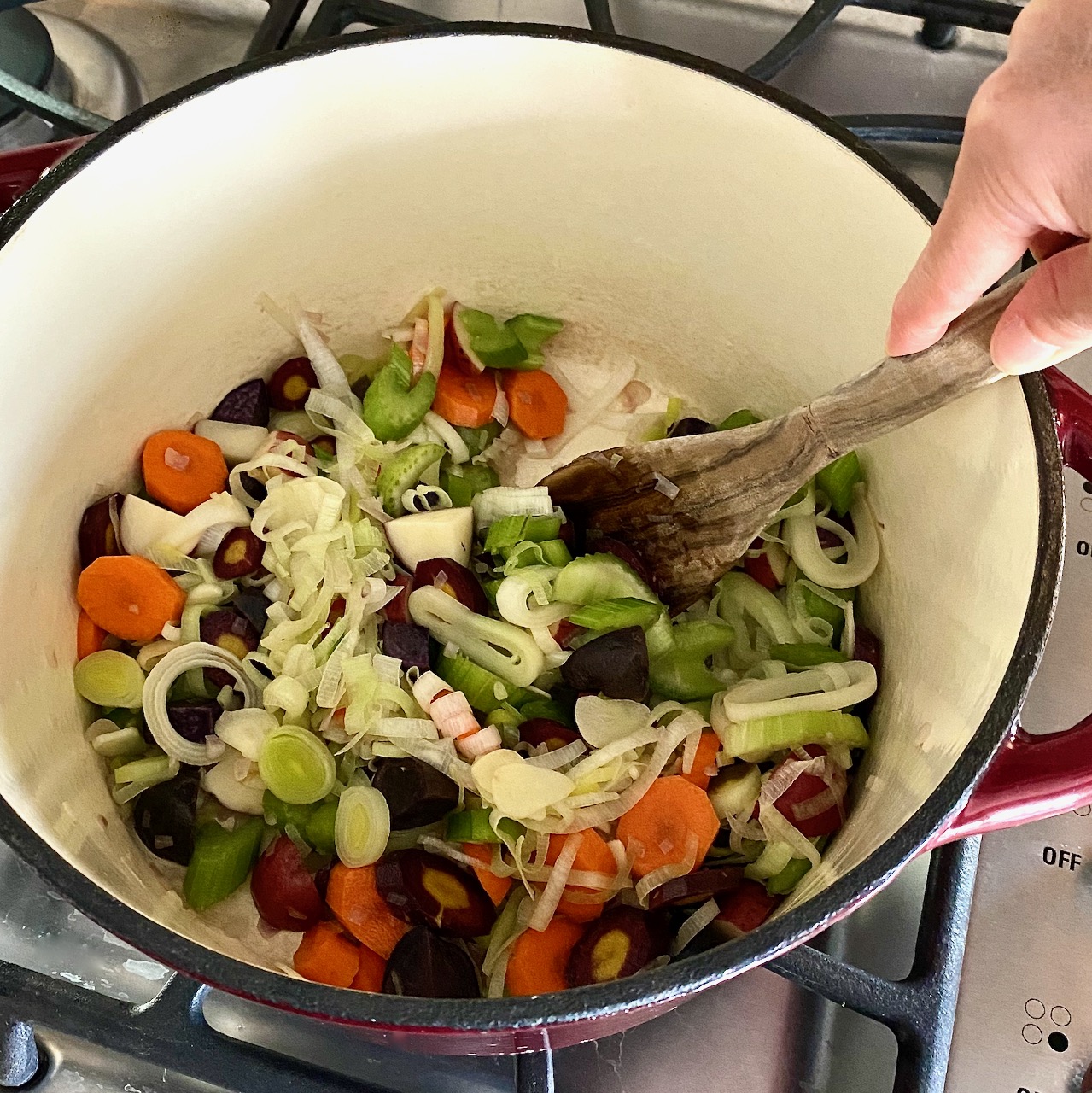 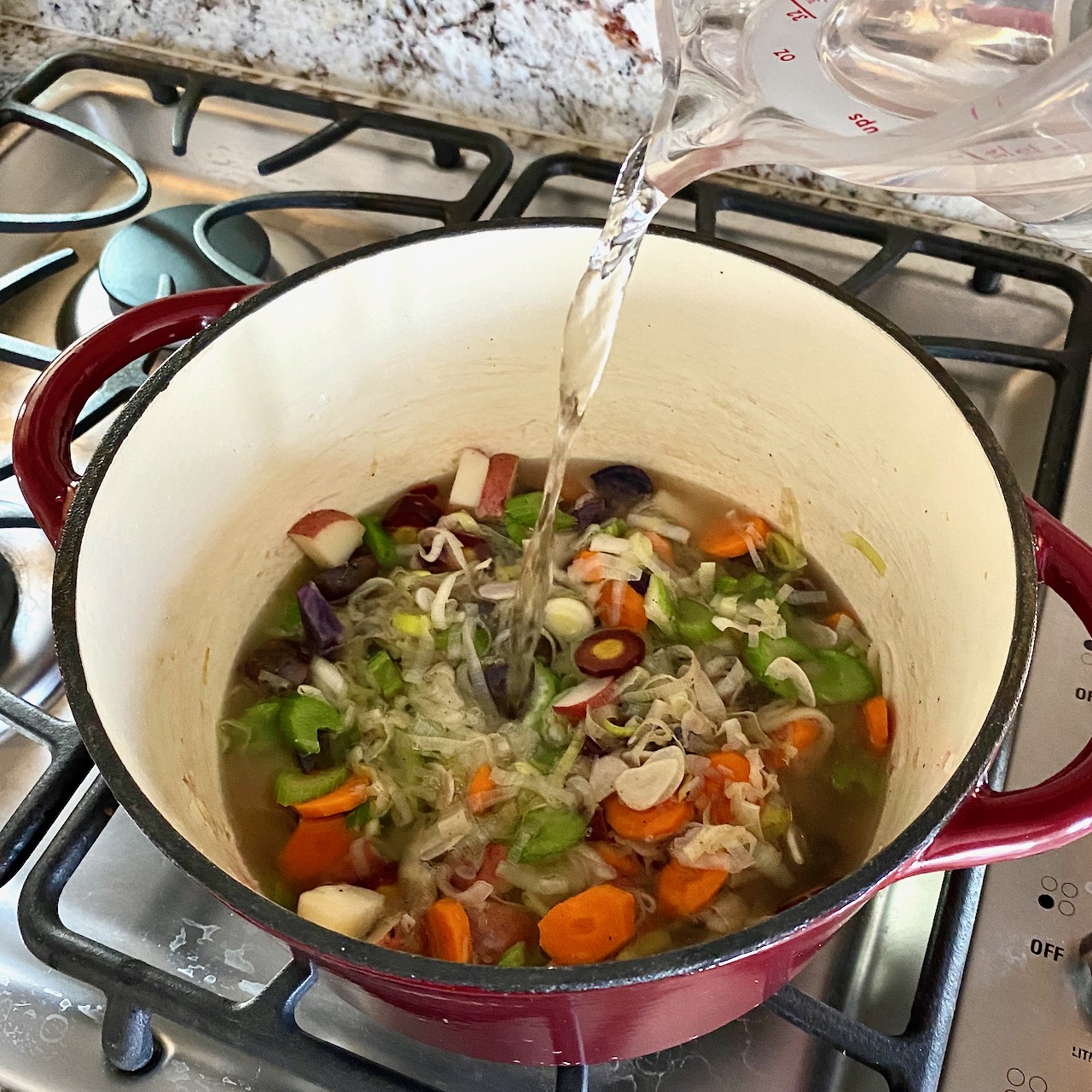 4. Turn the heat up and bring to a boil. Add the rinsed, drained French lentils to the pot. 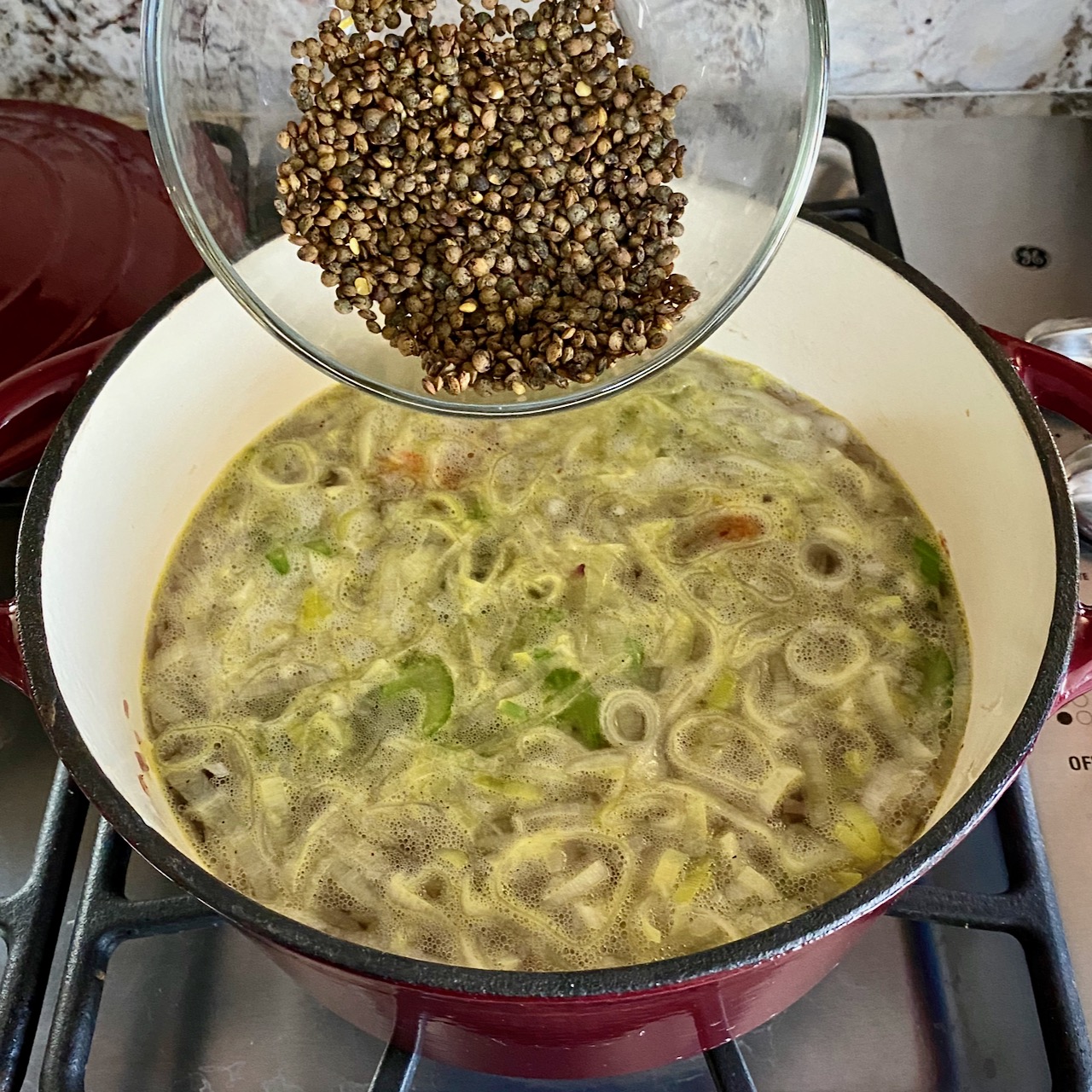 5. Reduce the heat to a simmer, and cook the lentils and veggies for about 10 minutes, stirring occasionally.

6. While the soup simmers, prep the rest of the vegetables and herbs: chop the zucchini and portobello mushroom cap, and mince the fresh thyme and rosemary. 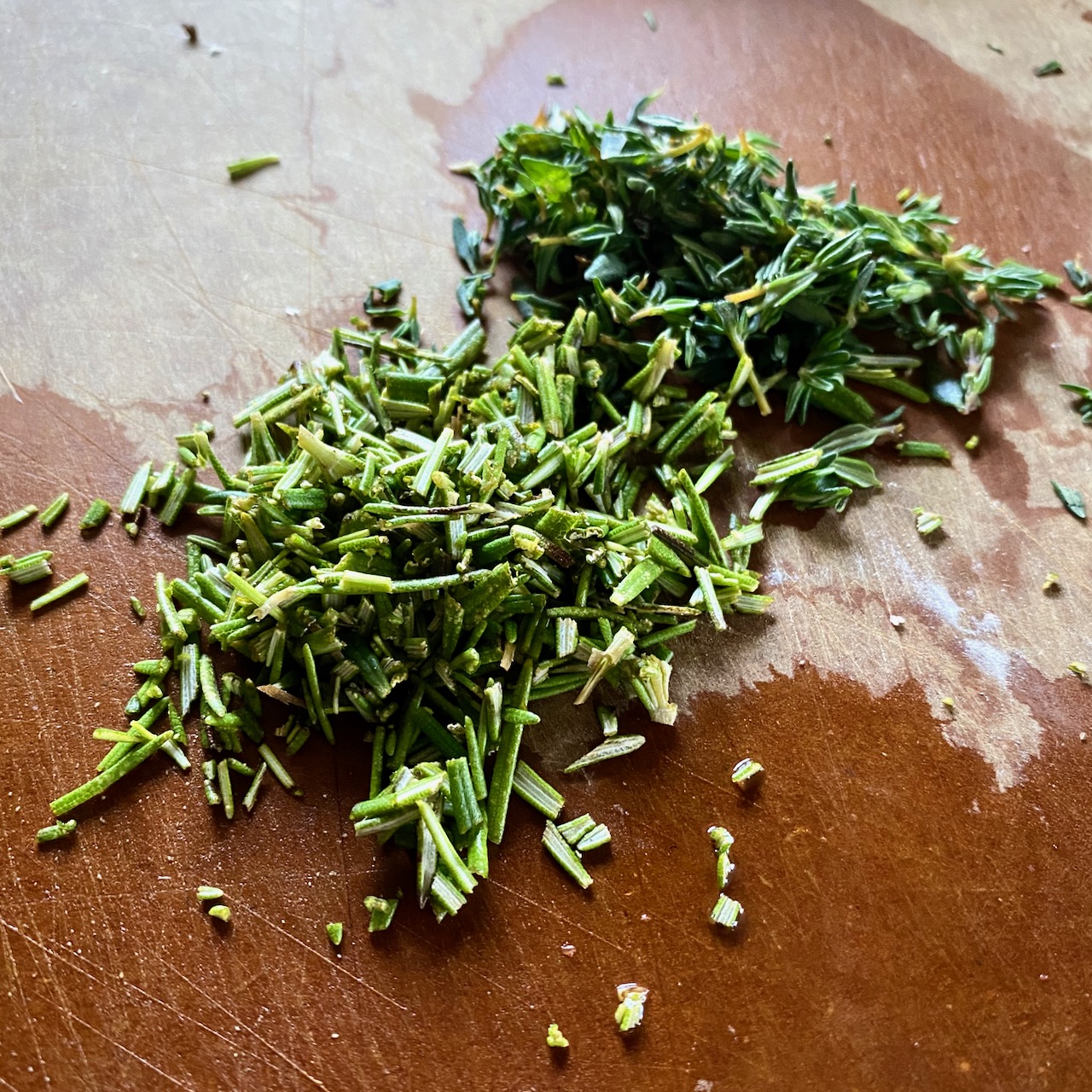 7. After the soup has simmered for 10 minutes, add the zucchini, mushrooms, minced herbs and fresh or frozen peas to the pot. 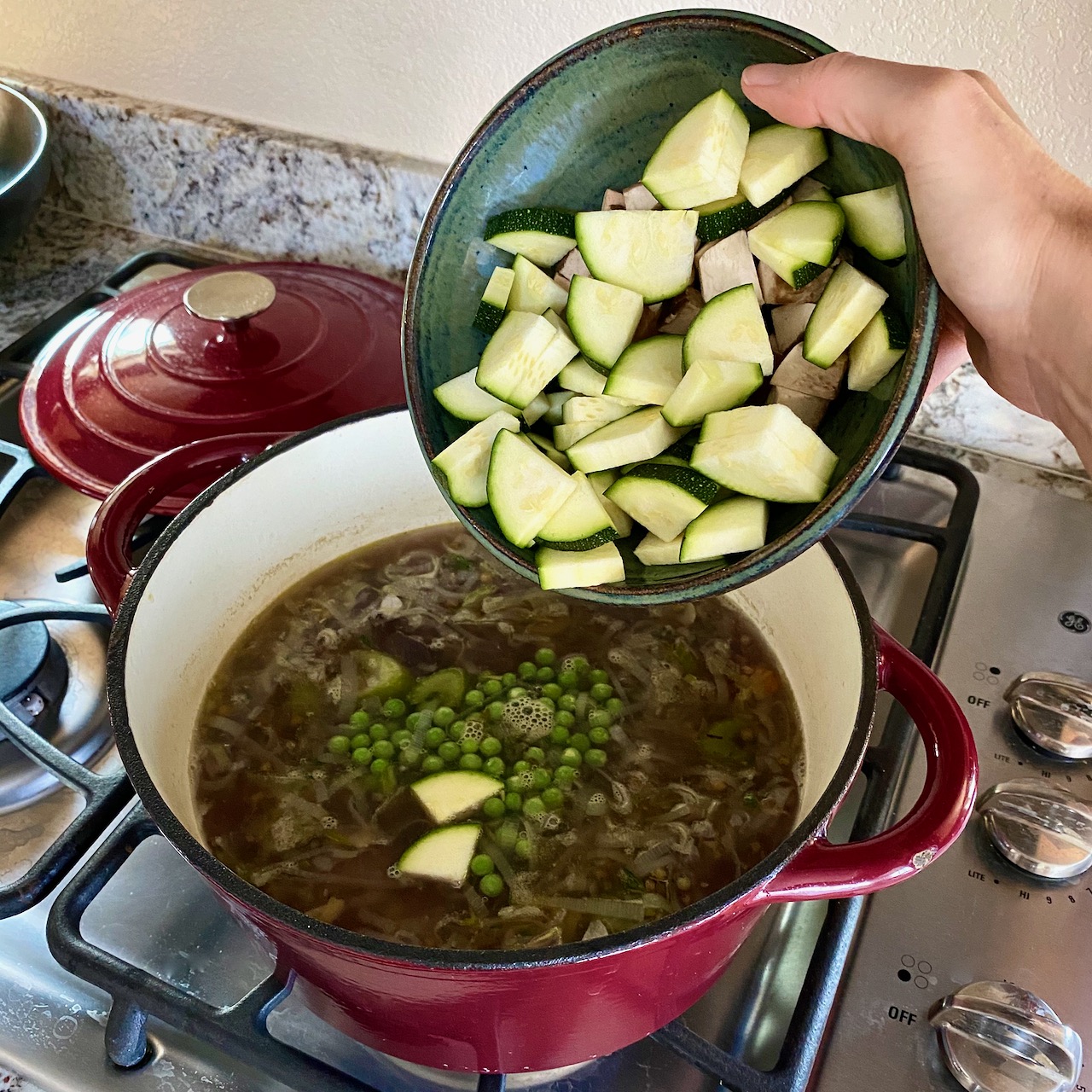 8. Season the soup with a half teaspoon of sea salt and dash of black pepper. Continue simmering the soup for an additional 5-10 minutes, stirring occasionally.

9. This would be a good time to blend your non-dairy pesto, if you're making your own. 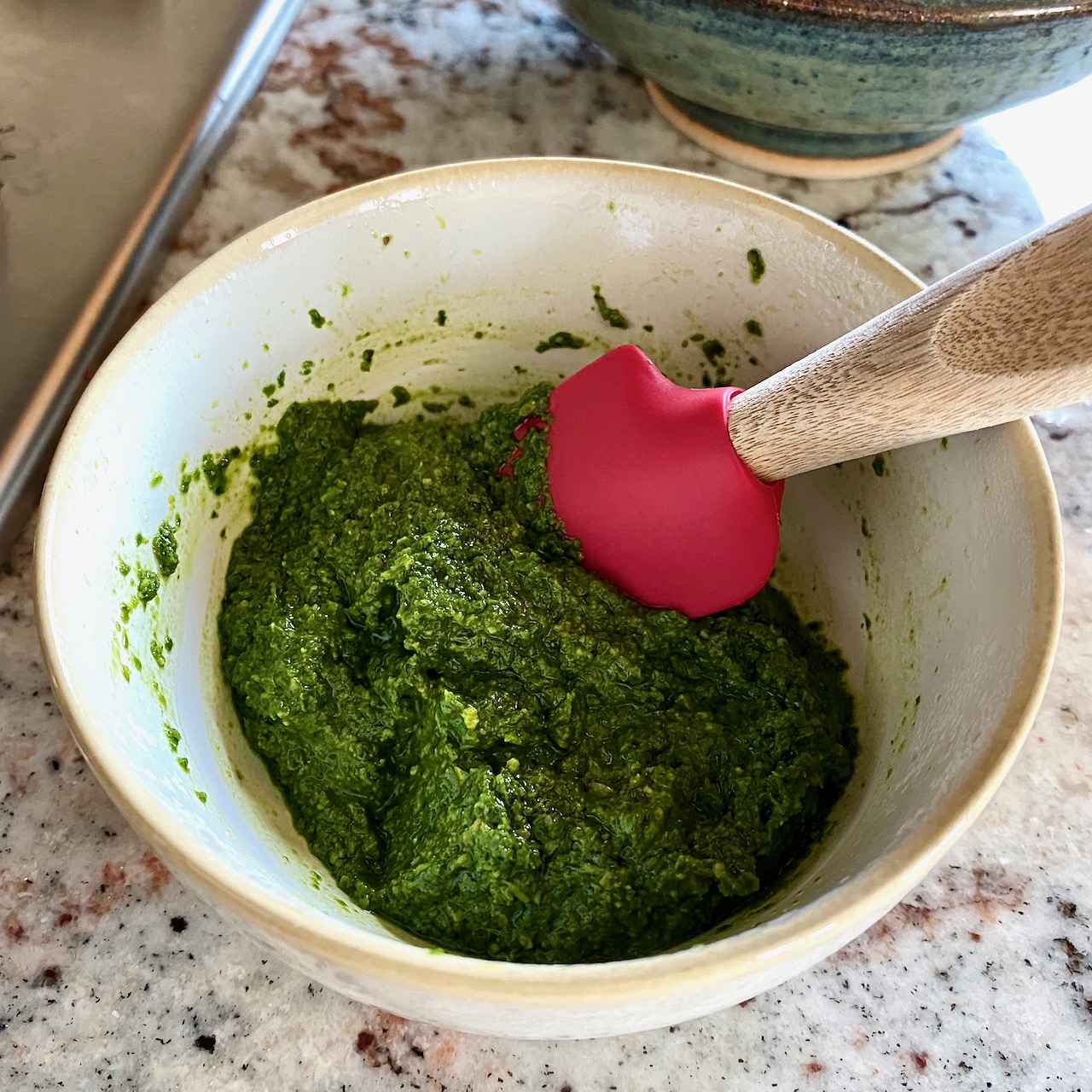 10. Carefully test the vegetables and lentils in the soup to see if they're done. The best way to check is to press the point of a sharp knife into one of the potatoes. If it goes in easily, they're done.

You'll need to taste the lentils to check those. As a general rule, they should be cooked by now, but if yours happened to be older, they may take a bit longer to cook through. Grab a spoonful of them from the soup pot and rinse them with cold water before tasting so you don't burn yourself. 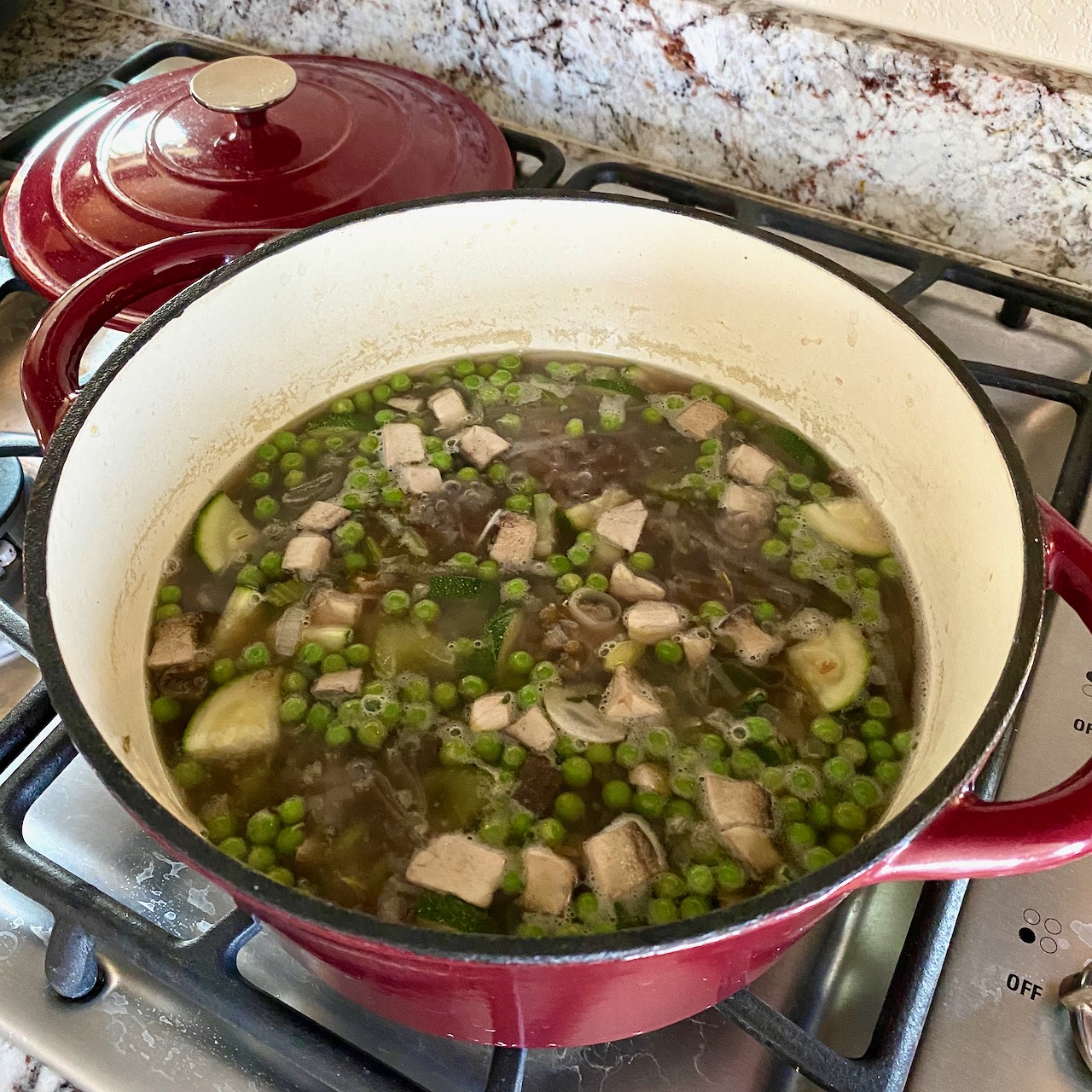 11. If the veggies and lentils are ready, then the soup is done. Ladle the soup into serving bowls. 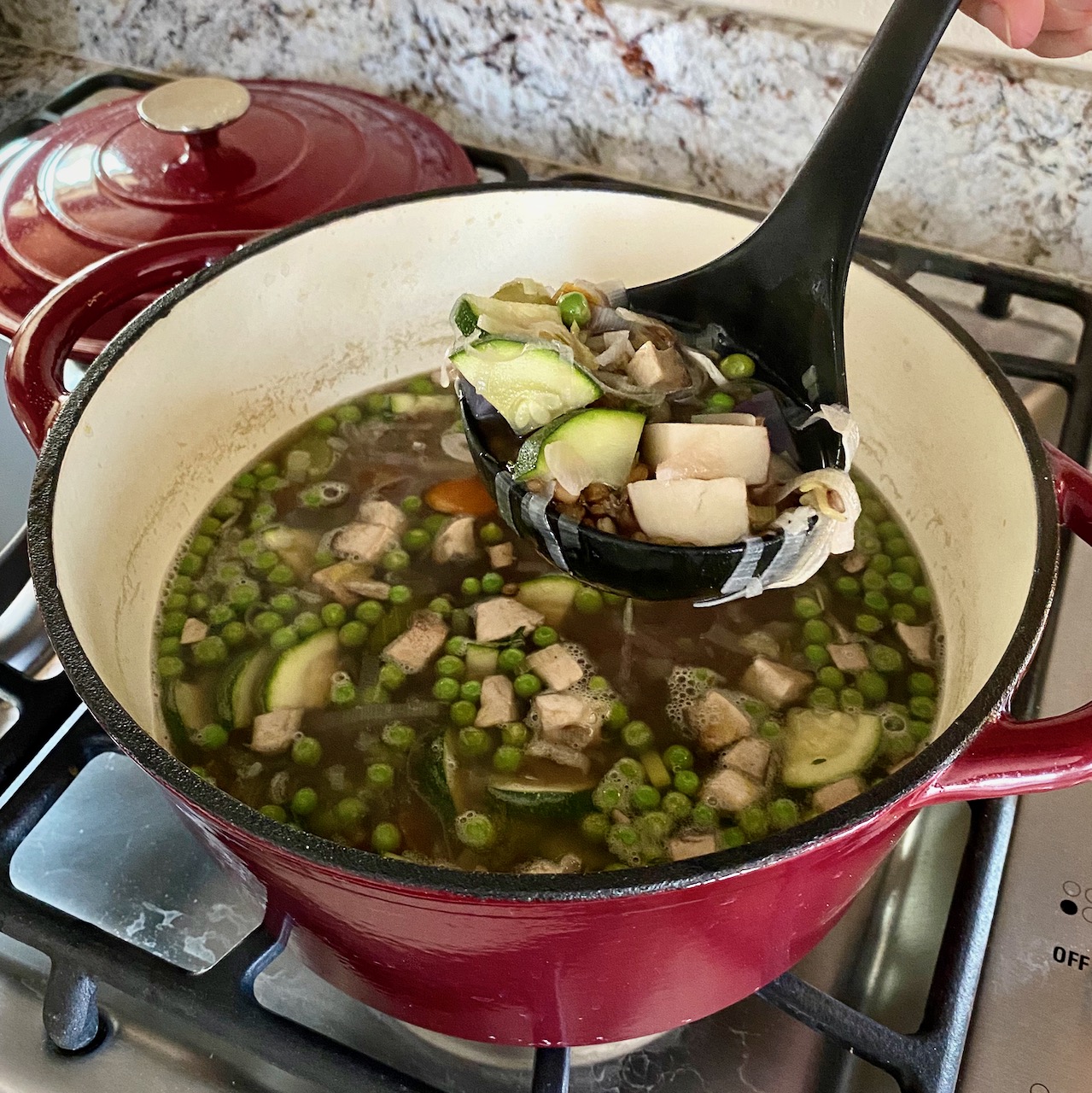 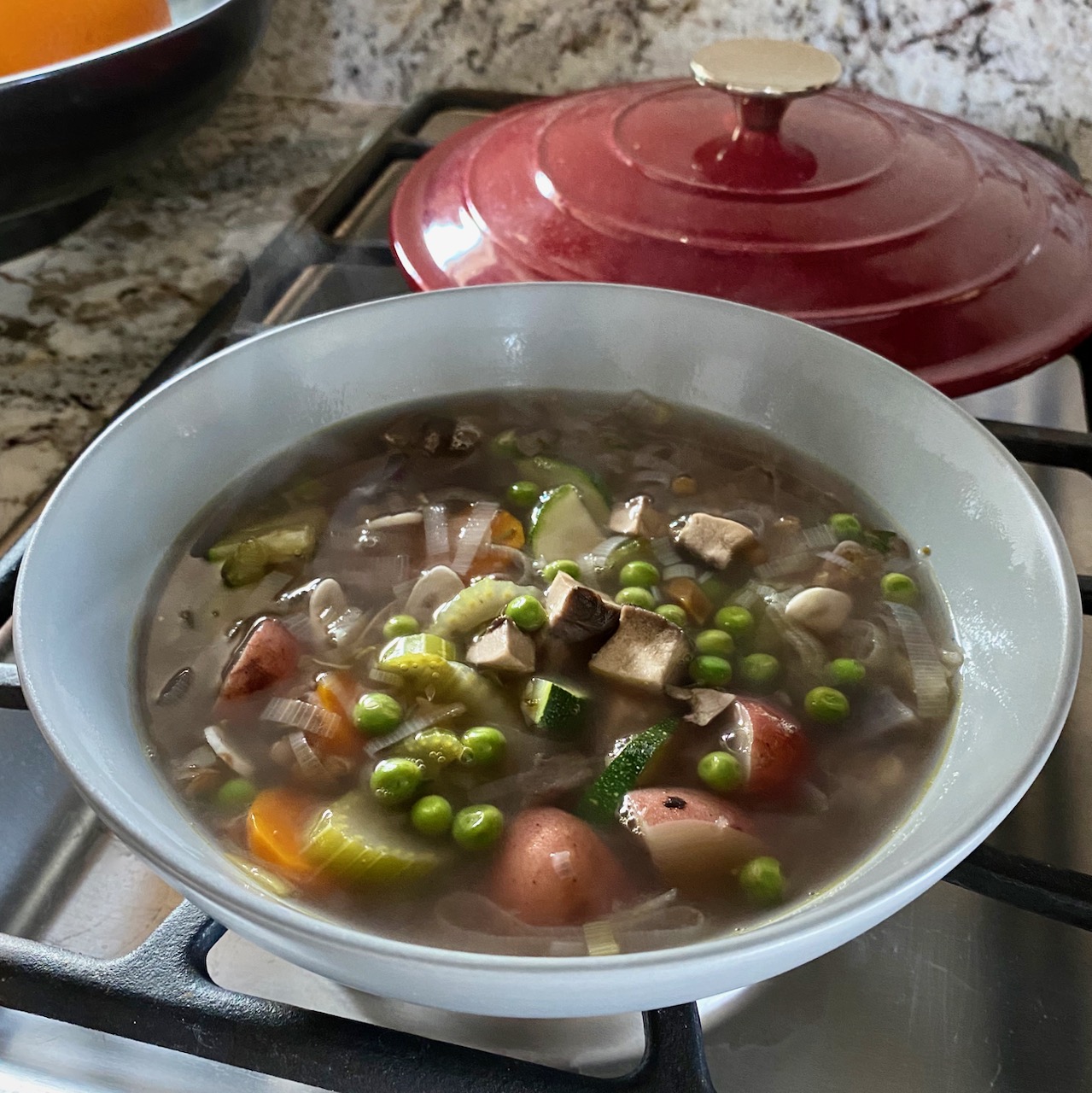 12. Place a dollop of pesto into the middle of each bowl. 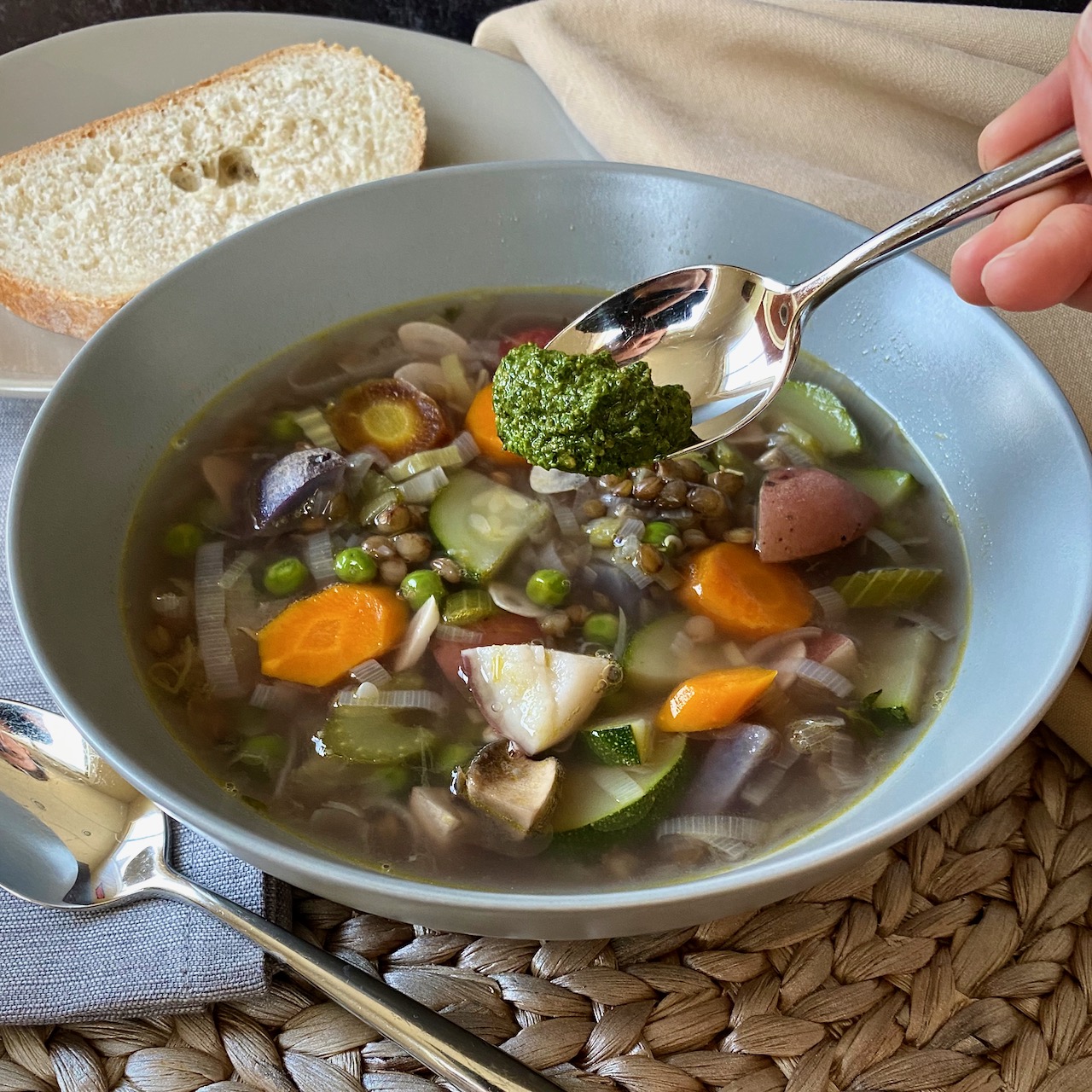 This soup goes really well with a slice of sourdough bread. 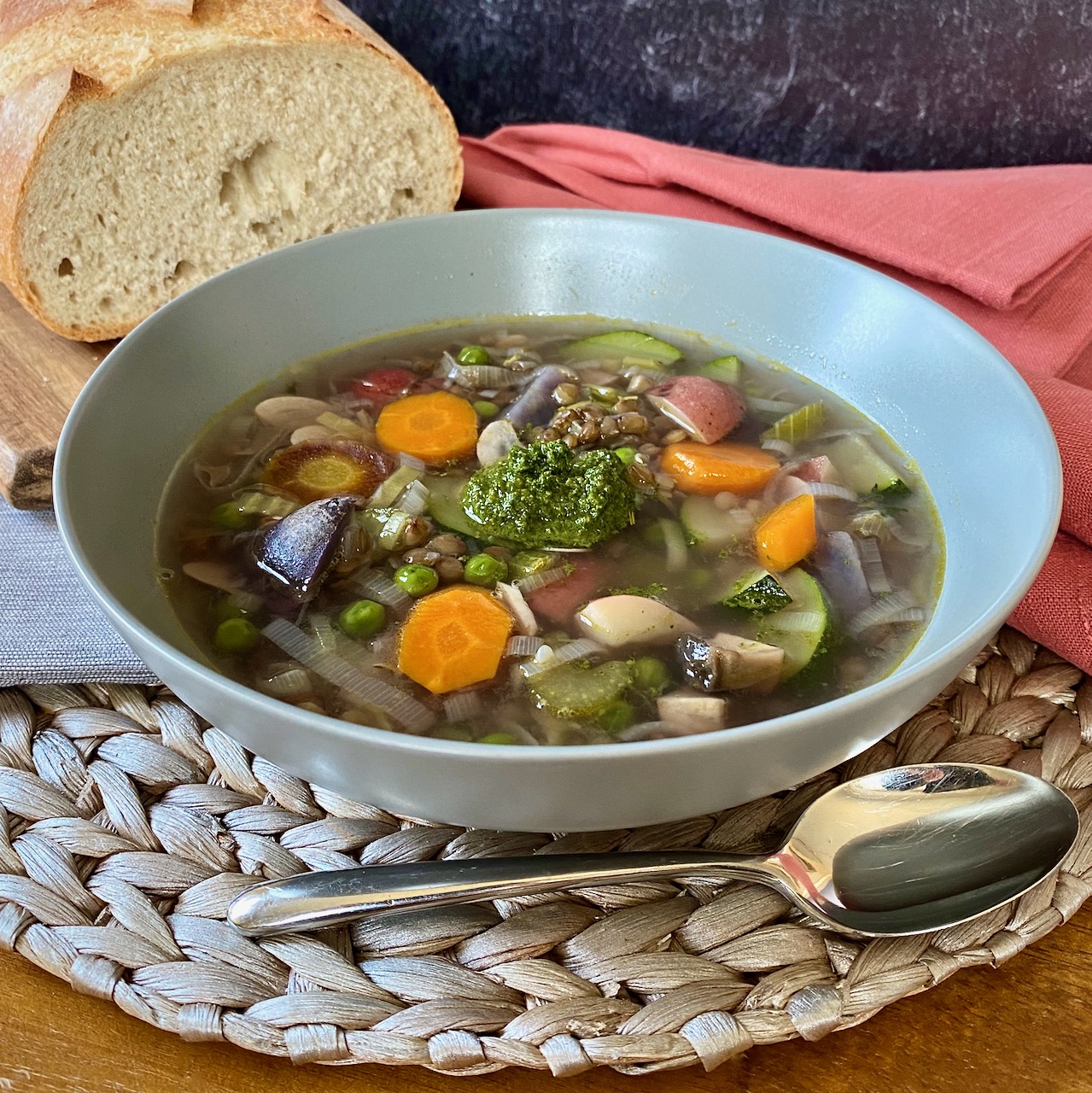 Each person is encouraged to stir the pesto into their own soup as they begin eating. 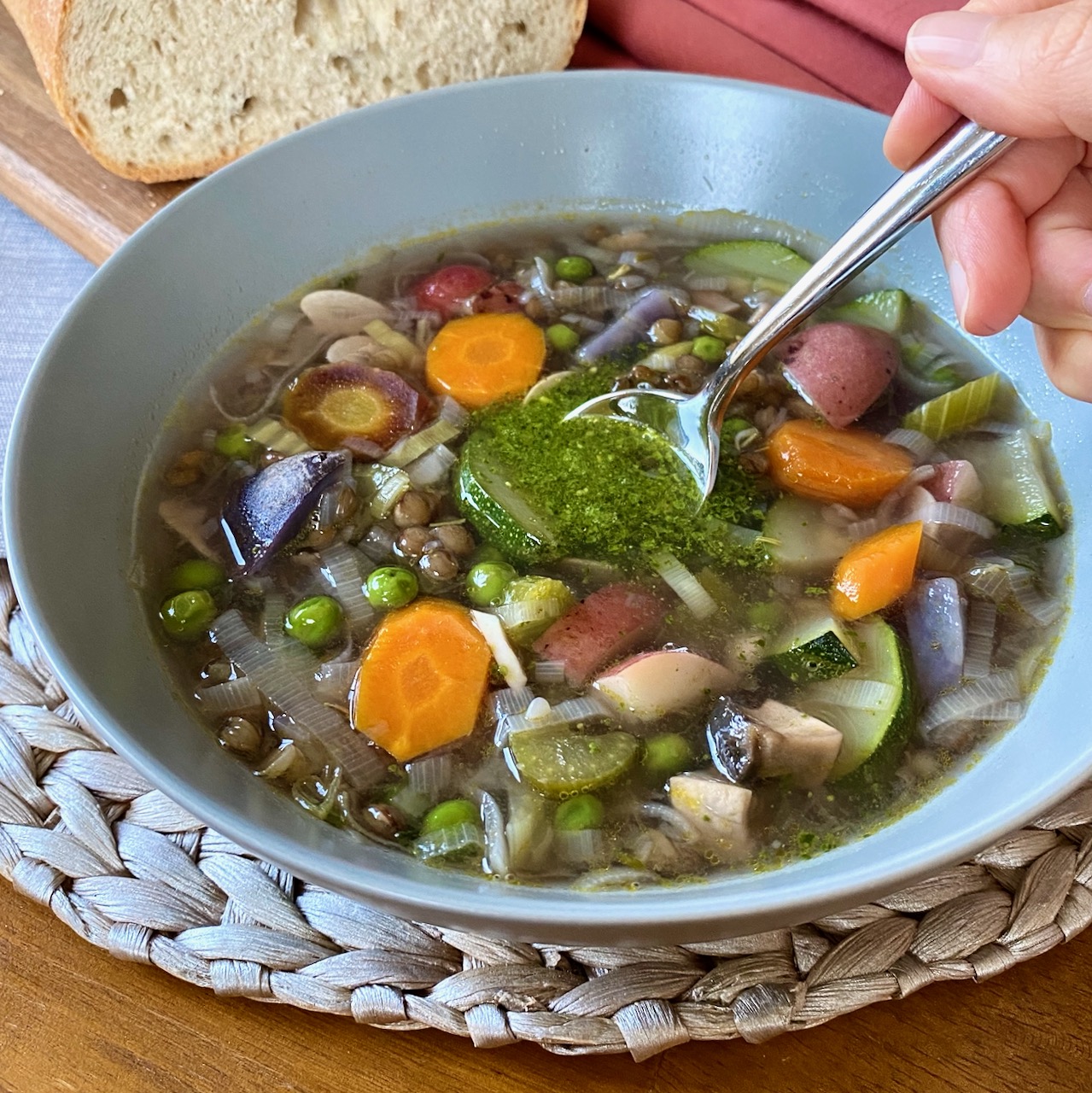 The pesto flavors the broth beautifully. It's so delicious! 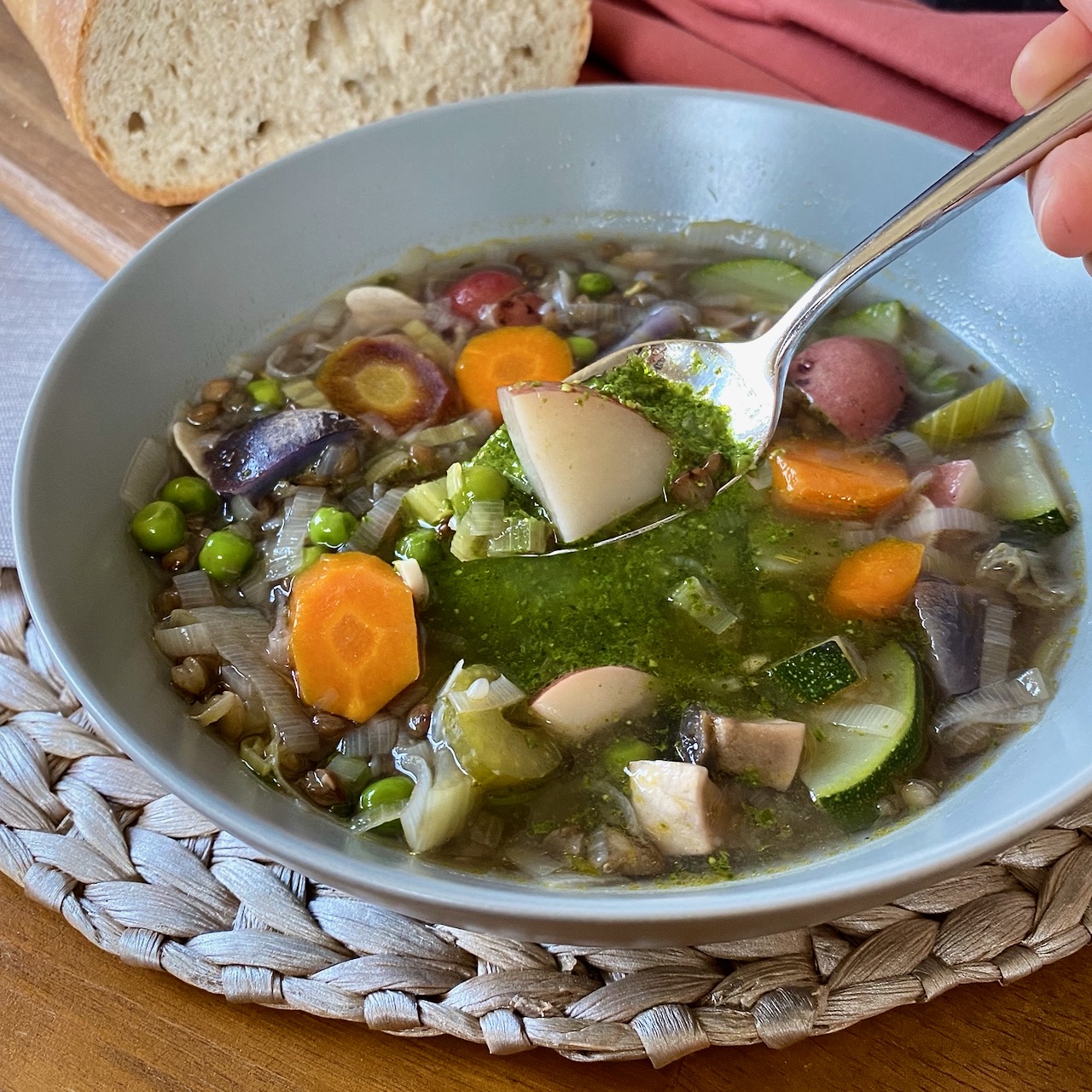 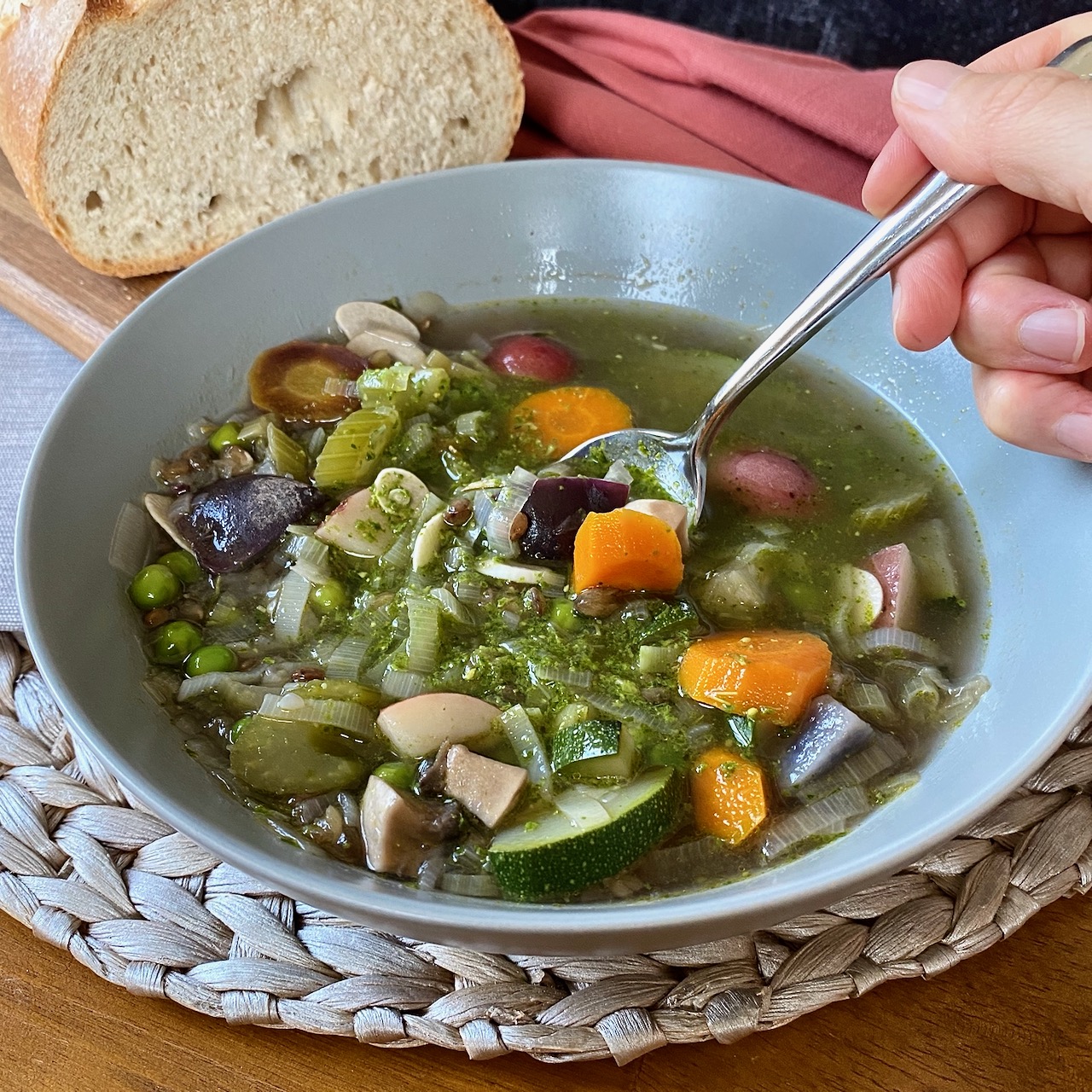 ...and receive my secret recipe for Pumpkin Chocolate Chip Muffins as a special thank you!

You'll also receive my latest recipes & special offers direct to your inbox, and always be in the know about my plant-based cooking classes. 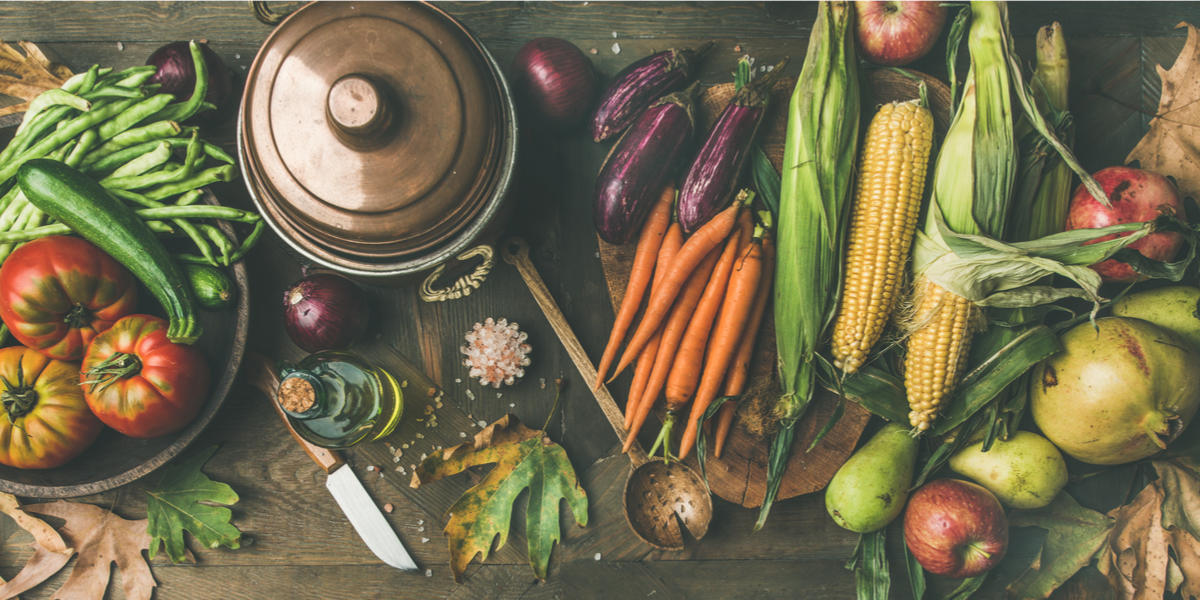 Step 1: Subscribe for delicious plant-based recipes direct to your inbox.